Once upon a time, I was making a long drive home. The drive was from my brother’s house, in central Utah, to my house, in Northeastern Colorado. If you’ve not made this particular drive before, I’ll fill you in on the important bits:  It’s long, boring, and almost entirely spent in Southern Wyoming.

Don’t get me wrong, Wyoming has some great stuff in it: Yellowstone, the Grand Tetons, the setting for “Brokeback Mountain”.  Southern Wyoming, however, really just has Tree in the Rock: 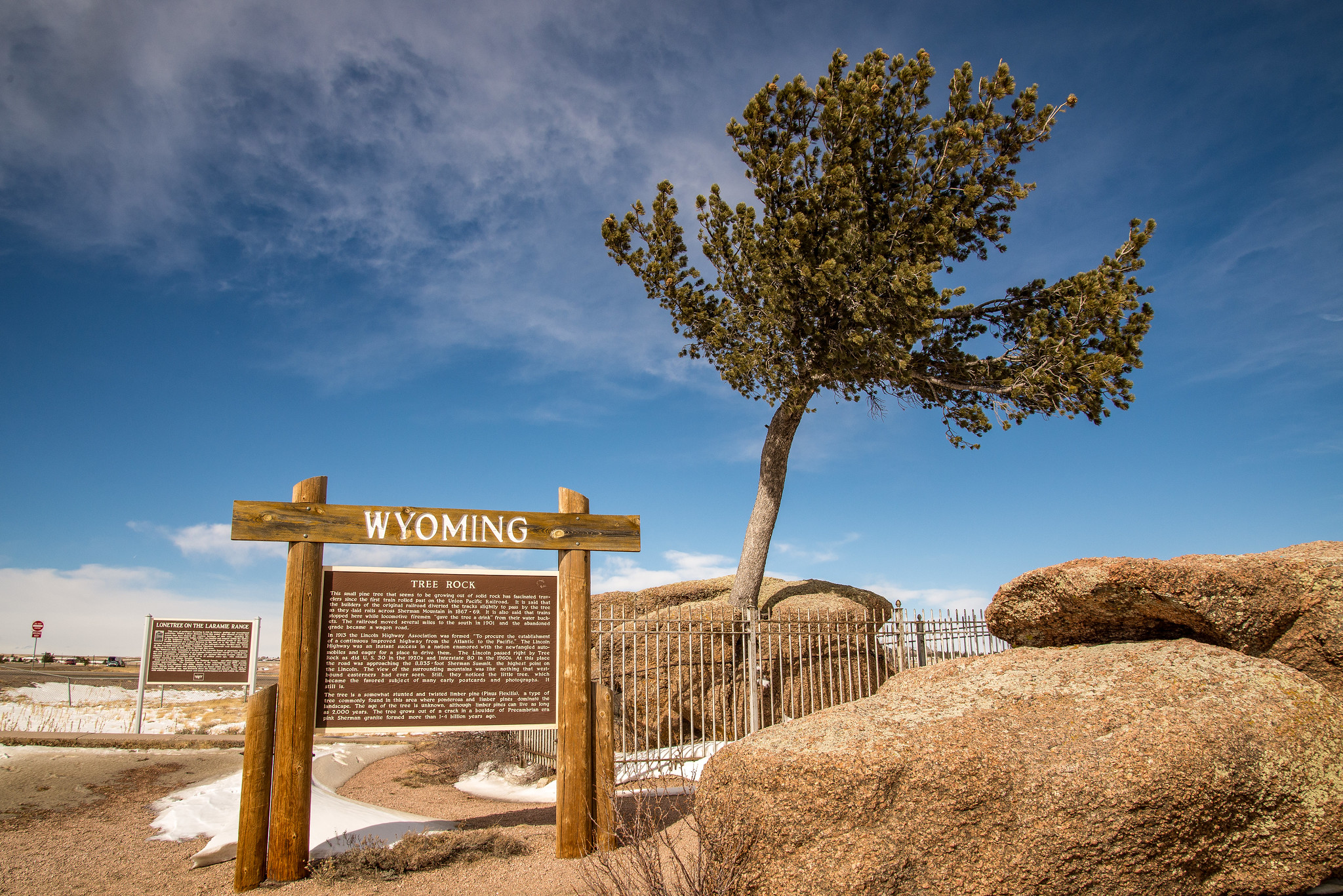 I made a lot of trips as a child across this road to visit my grandparents, and as I recall, this tree is really it – the most exciting thing I-80 has to offer.  It’s generally brown, monotonous, and most importantly, eternally windy. It’s the kind of place you just want to drive fast through.

As I recall, it was right around this time of year – maybe late February or early March. I was driving alone, and the weather was nasty – snowing pretty heavily, with very icy roads. On the way out of Utah, I watched multiple cars slide off the road. Once I got out of the mountains of Utah and headed into the plains of Wyoming, the weather seemed to let up a bit – not much snow on the roads, and even a peek of blue sky now and again.

So I sped up.  I was making great time, when I saw a road sign: “Highway Closed at Rock Springs”. Sure enough, I get to Rock springs a few minutes later, and the highway is blocked, all traffic being diverted into town. Immediately, I’m annoyed. I don’t want to be on this road any longer. I’ve been away for a week, and the idea that I’ll have to wait a few more hours (at best) in Wyoming, of all places, is unthinkable.

So, I made a good decision: I stopped, and ate a burrito. It was tasty.

Burrito consumed, I got back in the car and checked the radio: Highway still closed.  It’s been maybe an hour. So I figure I’ll do a little investigating. How closed is closed, anyway? Maybe I can get around it.

So I start poking. I try a frontage road, which, in case you call it something else colloquially, is the much smaller road next to the highway. I drive a little way down, and there it is – a state trooper parked sideways across the road. He flags me down and motions for me to turn around. I ask if he has any idea how long it will be. Clearly annoyed, he condescendingly tells me “Son, just head on back to town. It will be open when it’s open.”

I’ve had various problems with authority in my life, and I don’t take kindly to condescension – from a Wyoming State Trooper of all people. This man has just made my decision for me: I will find a way around this road closure.

So I head to a Mcdonalds, and use the wifi to pull up a map of the area. (Side note: At the time, this area of Wyoming did not have 3g service. I had no internet.  This should have given me pause.). I find a route that seems promising. it’s pretty far out of the way, but it should definitely get around wherever the closure is. Knowing I won’t have internet once I leave the warm glow of this McDonalds, I take this series of screenshots:

As you can see, my plan is foolproof.

So I head out. After a few misses, I find my first turn. I distinctly remember thinking it  was a little weird that I had so much trouble finding the turn, and that this road was so poorly marked. It looked like the road I needed to turn onto was not plowed, which also seemed a little strange. I put my blinker on, and slowed down. For a brief moment, I considered just heading back to Rock springs.

I turned onto the road. It was clearly unplowed, but that was ok – there were some tracks through it. The road felt a little strange under the wheels, and it took me a bit to figure out why.  Soon I realized: Oh – this seems bumpy because this is a dirt road. I didn’t notice because it’s covered in snow.  This was not part of the plan.  I carried on

As I drove on, the snow on the road started getting deeper. What started as wide, messy tracks slowly transitioned into deep, well defined ruts in the snow.  But I was ok – I’d driven in the snow lots of times before.  It was fun!

At this point I realize that I should probably be concerned.  This isn’t going well.  Still, I drove on.  Because – what if I’m just about to hit the next road – plowed and dry?  Won’t I feel silly for almost having turned around!

As I’m having this thought, I head around around a bend.  The road becomes sloped down to the left. I can’t keep my tires in the ruts, and in spite of steering and frantic yelling, the car starts to slide toward the ditch at the bottom of the slope. I know if I end up in the ditch, I won’t escape without a tow truck. So I stop the car.

The car stopped. It was mid afternoon, and I knew it would be dark in a couple of hours. I was on an dirt road, covered in close to a foot of snow, and I was probably 25 miles from the closest city. The gravity of the situation was setting in. Getting to this point involved a number of poor decisions, but those were irrelevant now.

I decided I needed to get the car turned around.

Of course, this might not have been the right decision. I didn’t know how far the road ahead was. I didn’t know what the conditions ahead were. It might have been smarter to keep driving forward, or just start walking and abandon the car, or just hang out in the car with the heater on and wait for someone to come along. I didn’t know for sure – but in that particular moment, I committed to the decision to turn around.  I knew if I thought about it too long, I’d second guess myself – so as soon as the car stopped, I was out the door, figuring out what I was going to do.

My plan was to clear the snow from a large portion of the road so that I could turn around on dirt, not snow, and avoid sliding down into the ditch.  I’ll do it  Austin Powers style – lots of back and forth.

So I dove in, working frantically, to keep my mind from spending too much time thinking of how this could go wrong. Get down on my hands and knees, push a bunch of snow out of the way, hop into the car, move it a foot.  Hop out, push some snow, hop in, move it another foot.

I had the car a little over halfway turned around and I look up, and to my surprise, see a rowdy pickup truck coming through the snow. I look up, and lock eyes with the driver. I’m in the middle of nowhere, down on my knees, in wet jeans, pushing snow around on a dirt road with my hands – not unlike a child in a sandbox –  next to a 15 year old Honda Civic.

There is an iMac in the backseat. It’s wearing a seatbelt. My shame is palpable.

I knew I had to ask for help – but to do so meant acknowledging my situation and the decisions I had made that got me there. Terrible decisions that I didn’t want to have to justify to anyone. He rolled the window down, and offered to push my car back into the middle of the road, because he didn’t have a tow rope. I was appreciative, although the plan of essentially ramming my poor little civic down the road was not my favorite.  Still, what could I do?

He attempted to drive around the back of my car (ramming position), but getting there was tricky because of the snow and the slope.  He managed to slide his truck into the ditch, and had to spend some time figuring out how to get out of it.

In the meantime, I kept working. I had the car pointed mostly in the right direction, so I cleared 20 foot “runway” in front of it that I could use to pick up speed before I had to get back into the snow. I hopped in my car, signaled to them that I was going for it, and took off, shouting “thank you!” out the window.

A few seconds later, I was back in the ruts, and headed back towards town. I had made it.  I’m not sure what happened to them, but I like to think that at the very least, they had a pretty funny story  when they got to their destination.

I slowly made it back to Rock Springs – beaten, but alive. I pulled into that same Mcdonalds – the one where my plan was originally hatched.  I went inside, ordered a milkshake, and sat down – willing to stay there for hours – days even – until that condescending state trooper told me it was all clear.